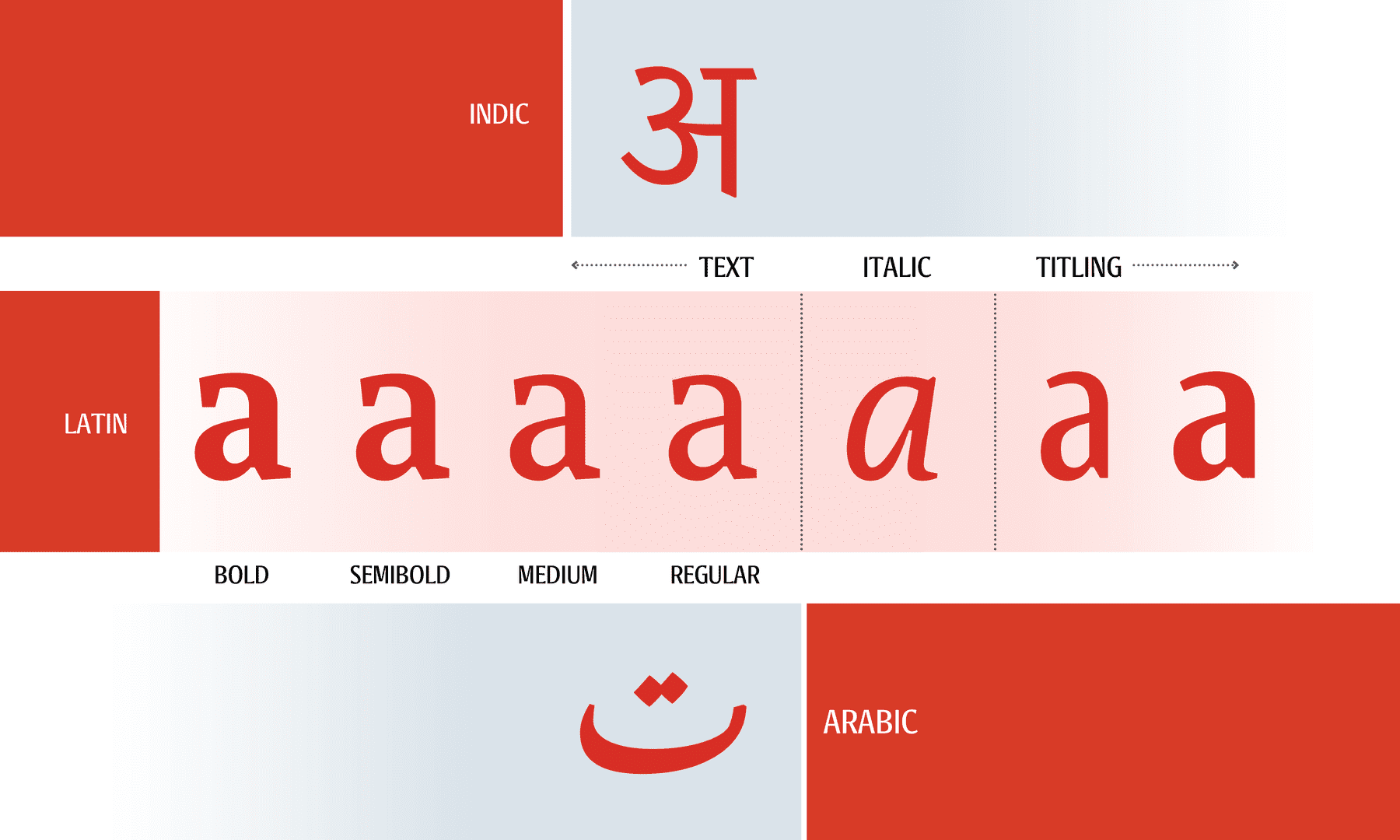 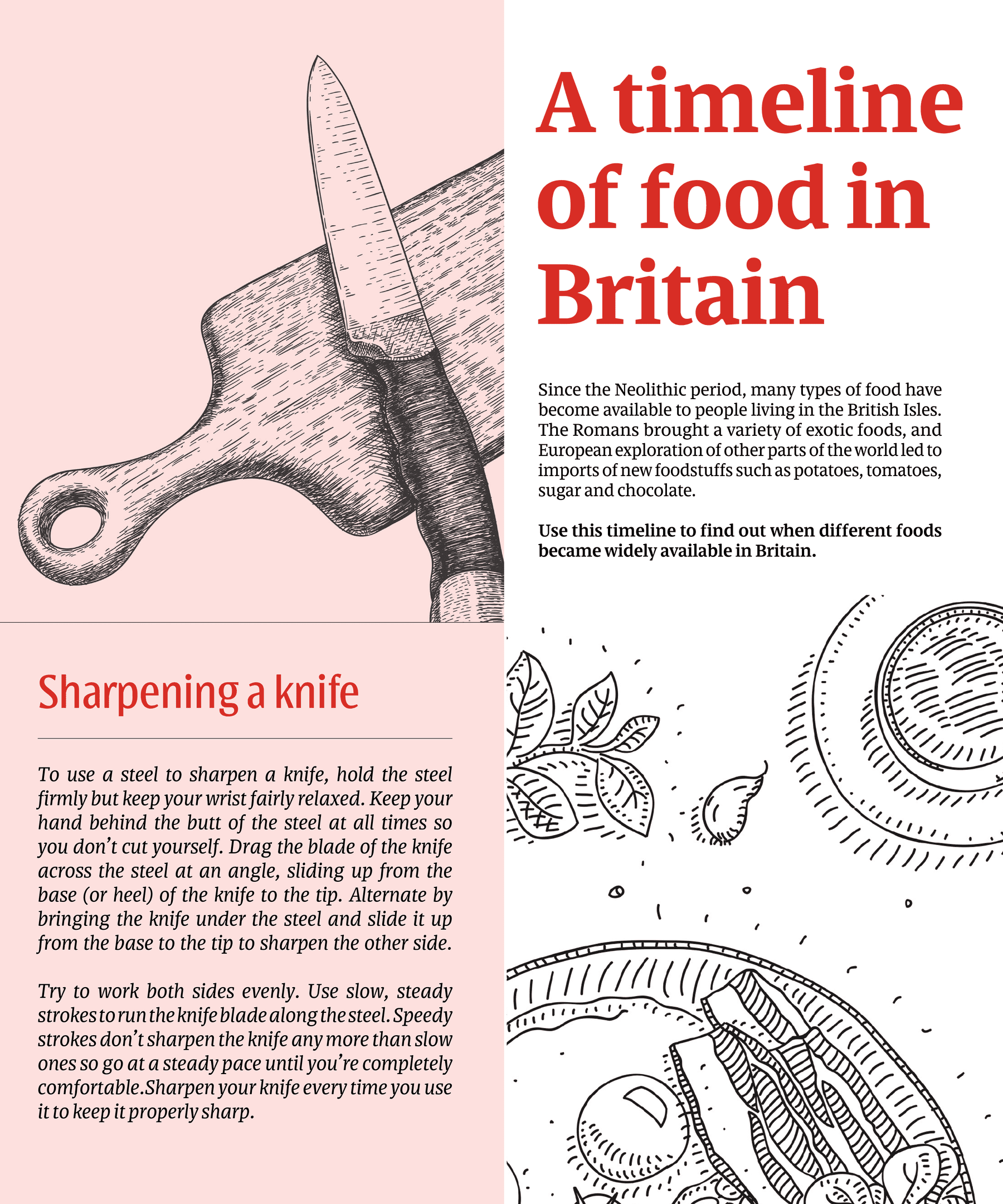 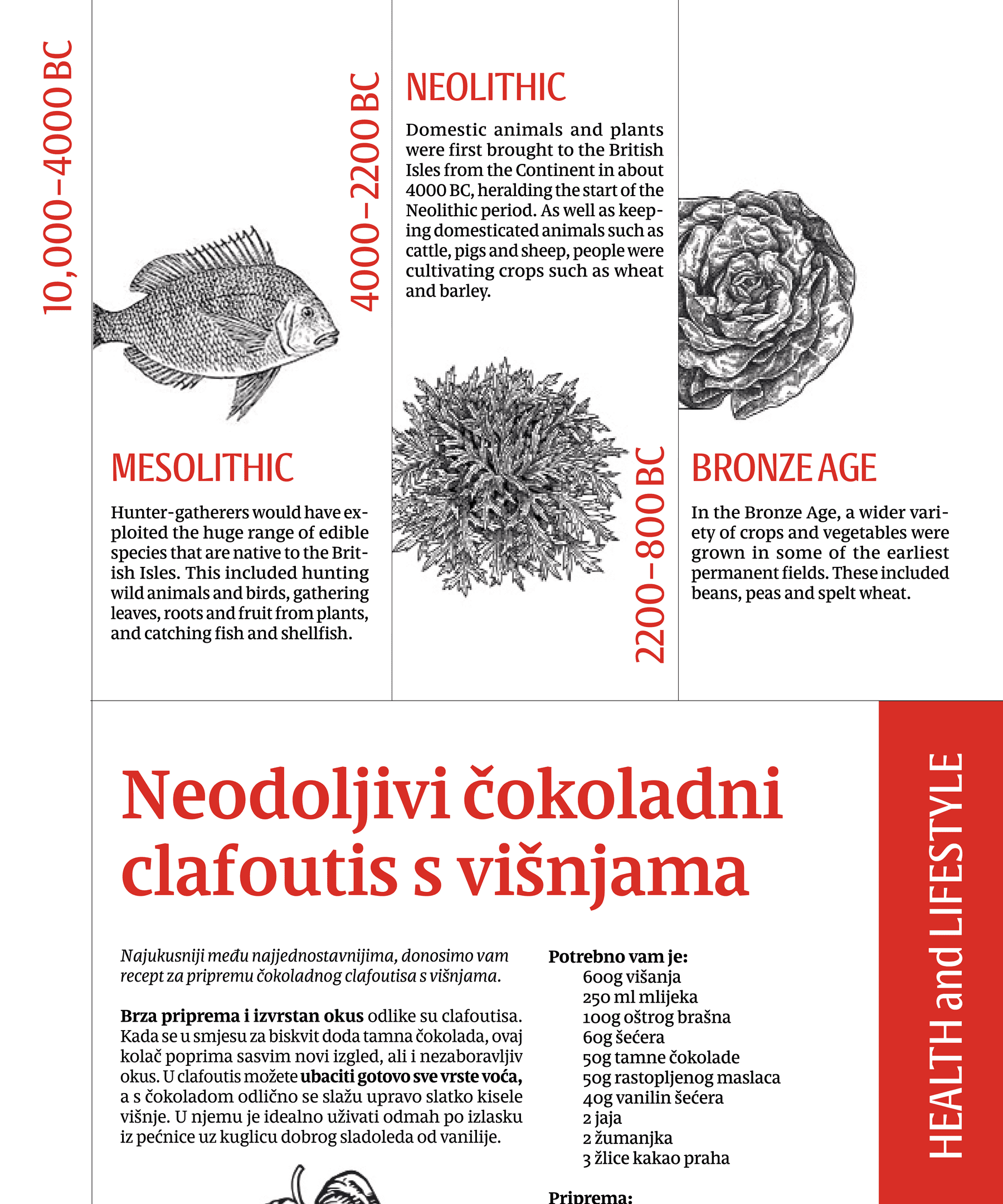 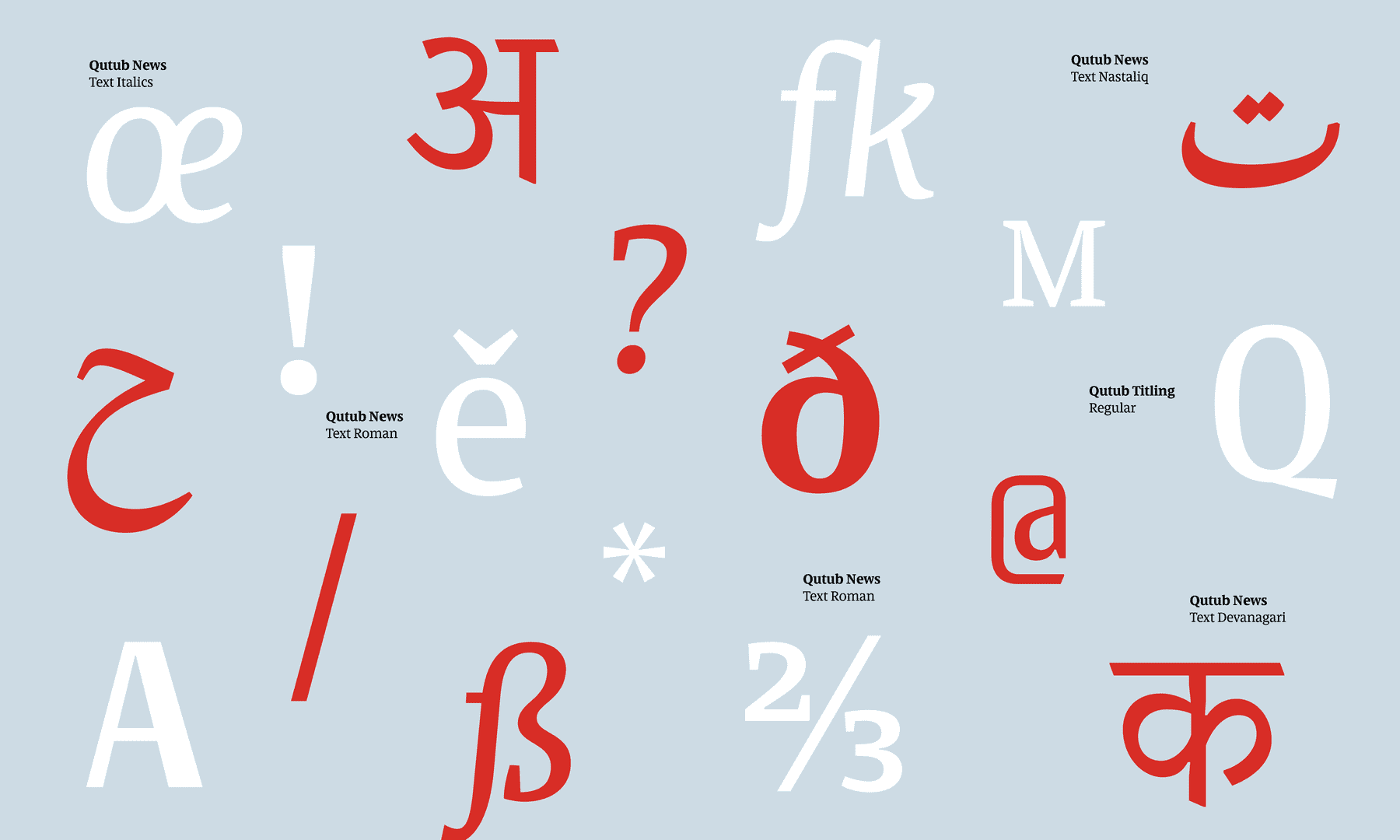 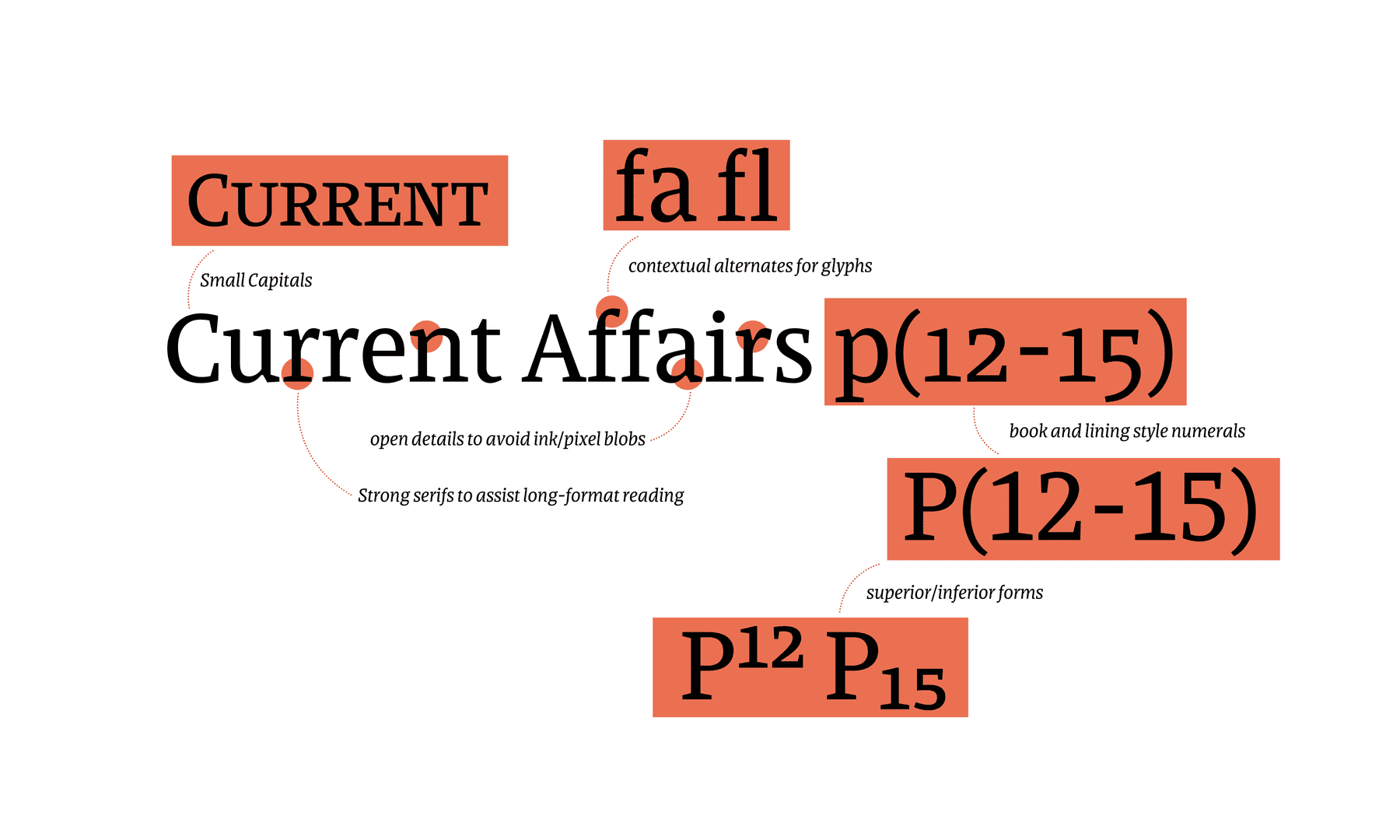 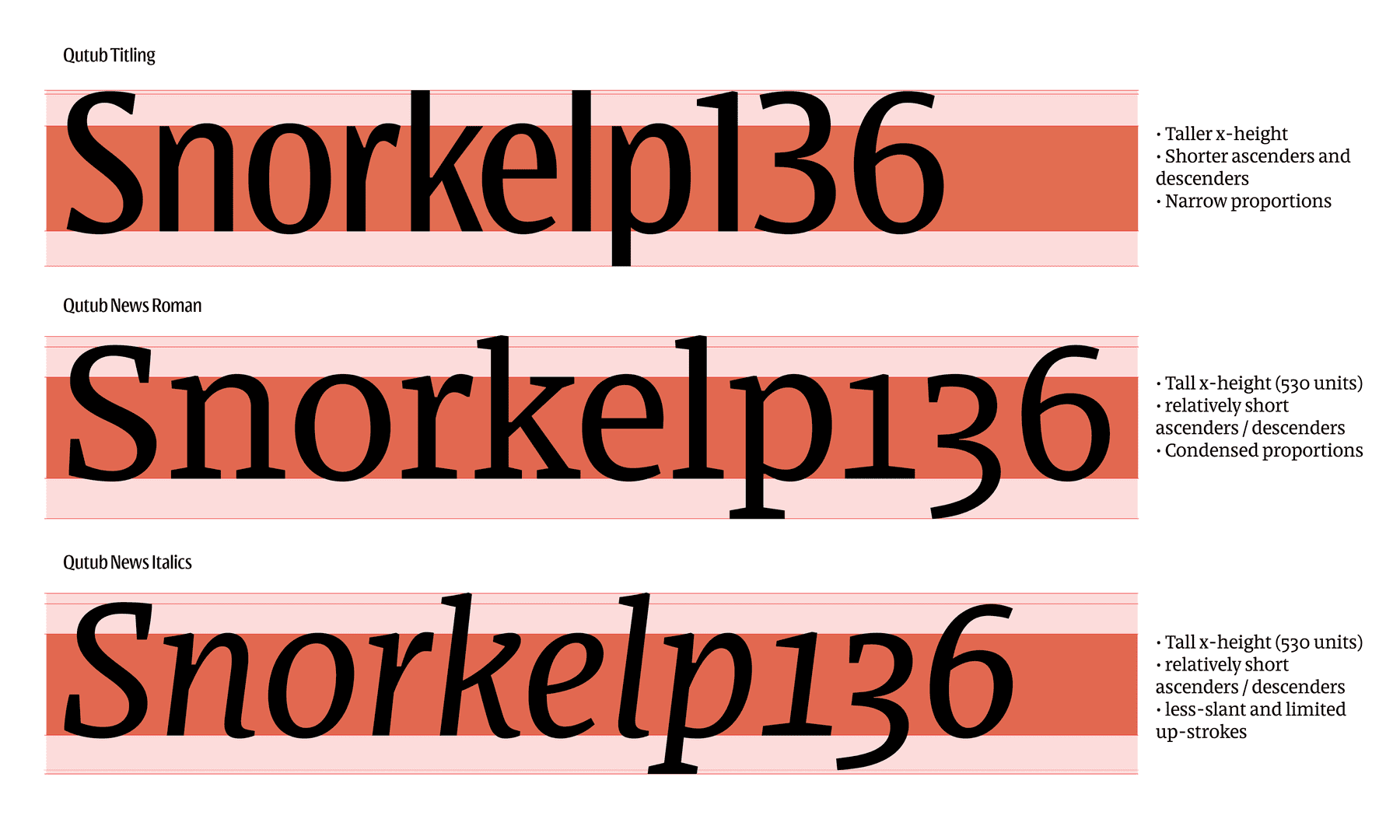 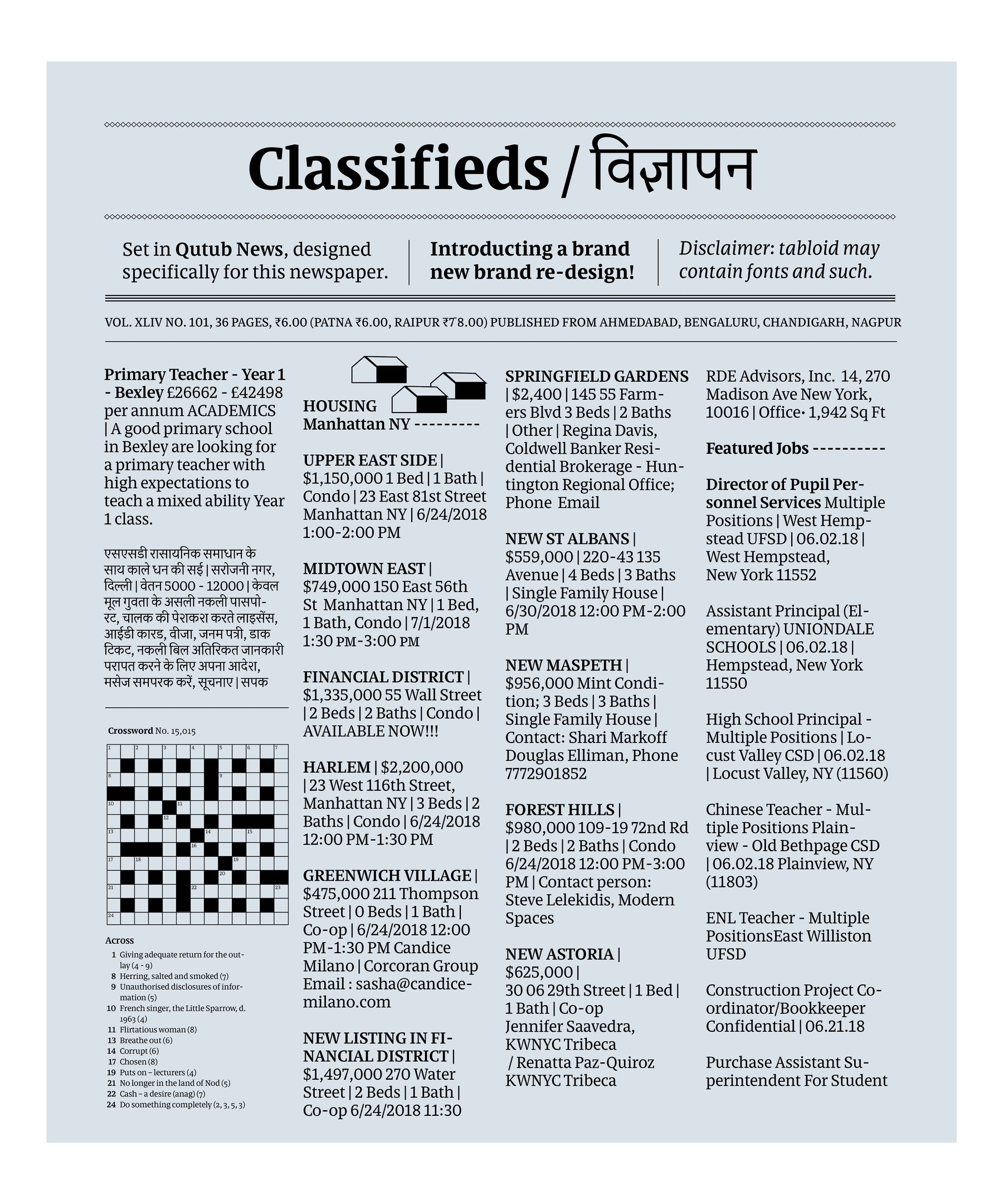 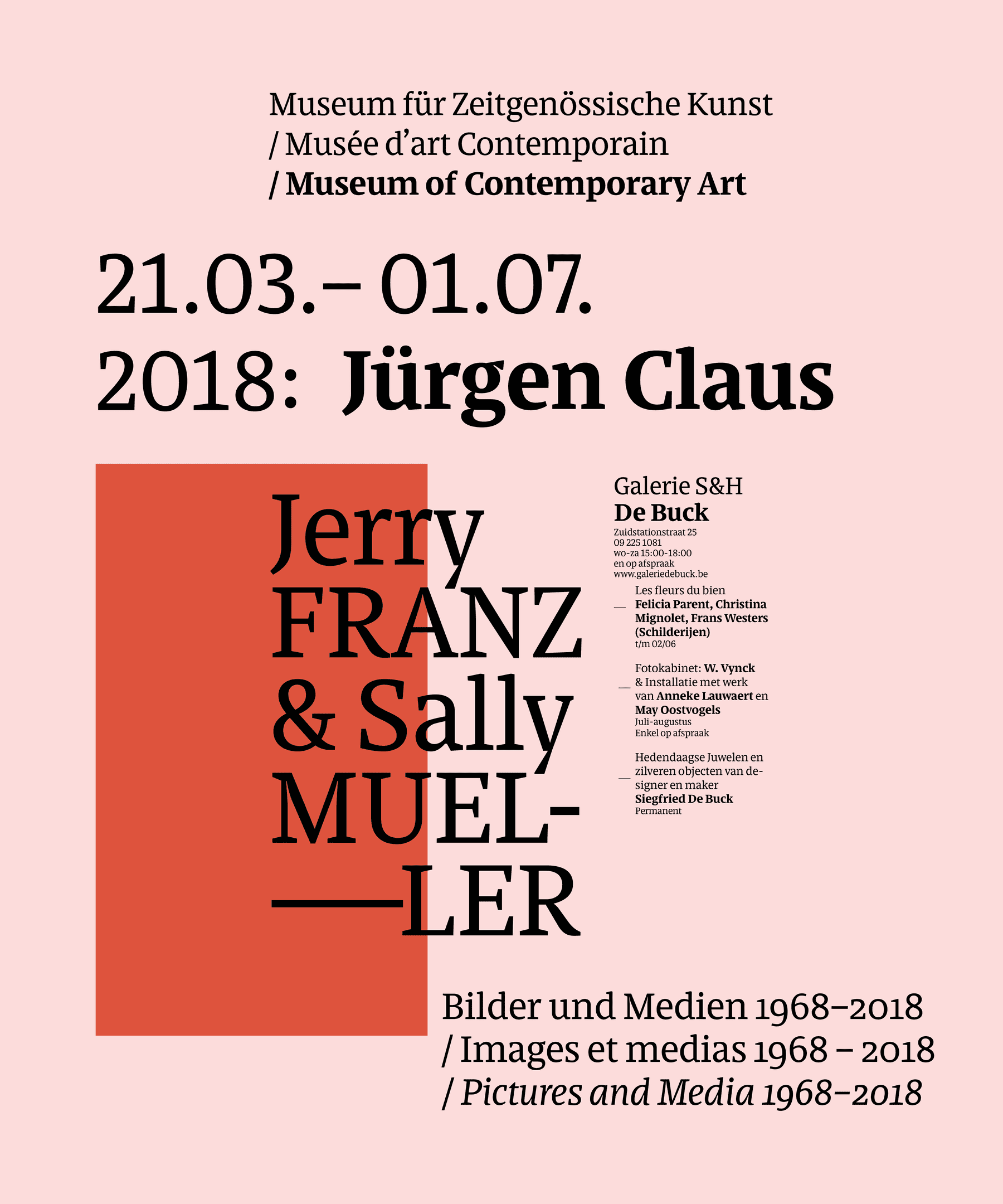 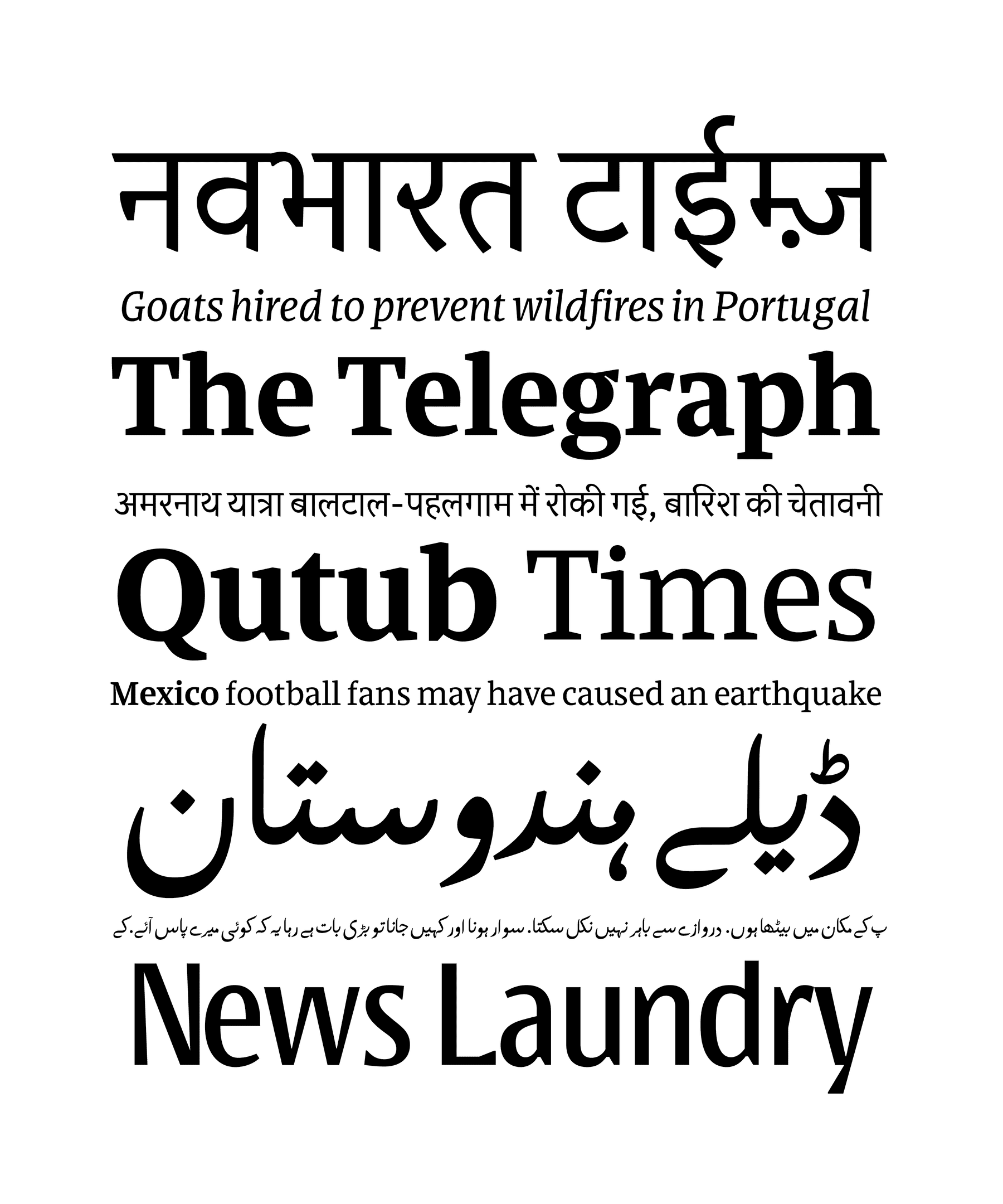 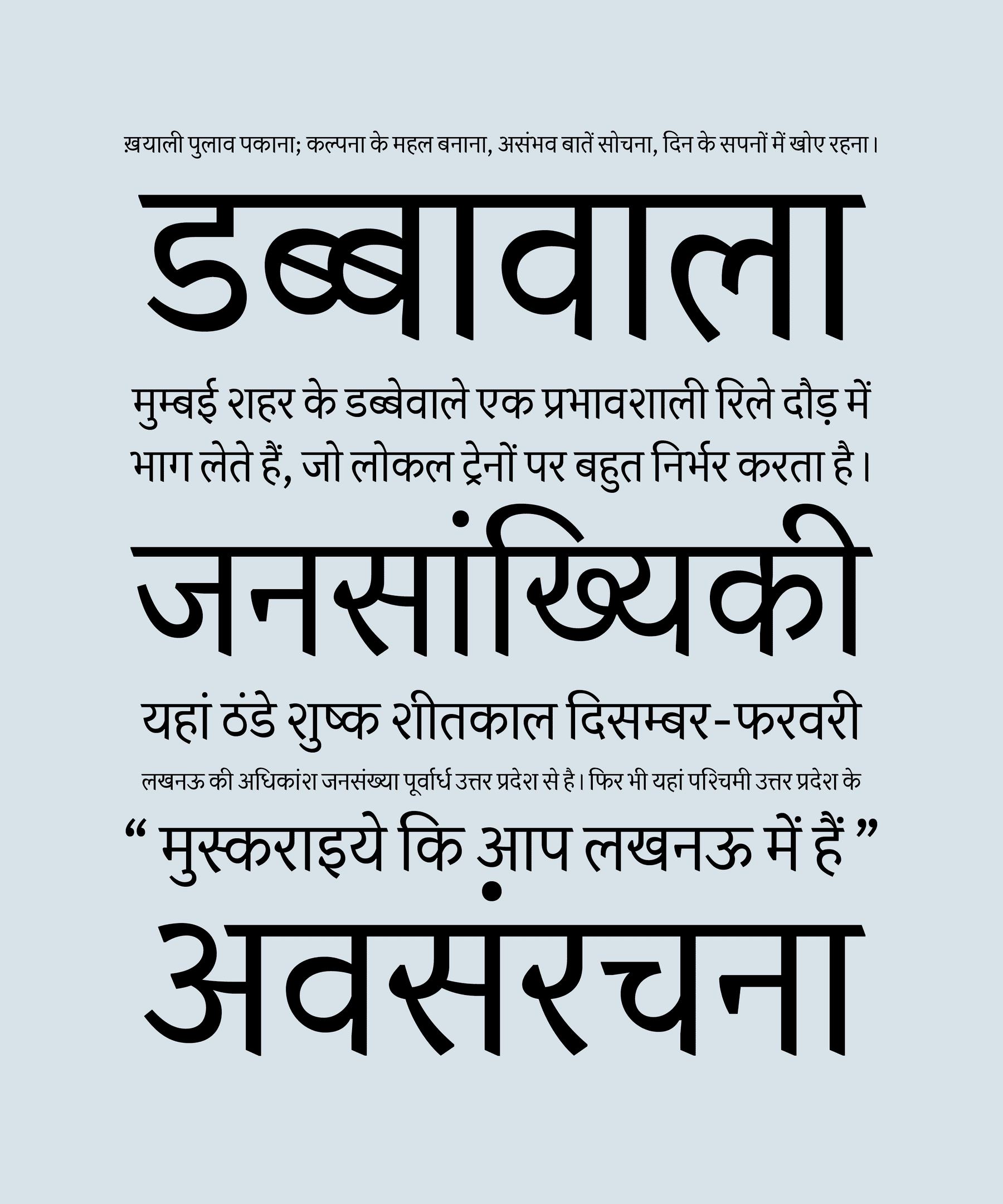 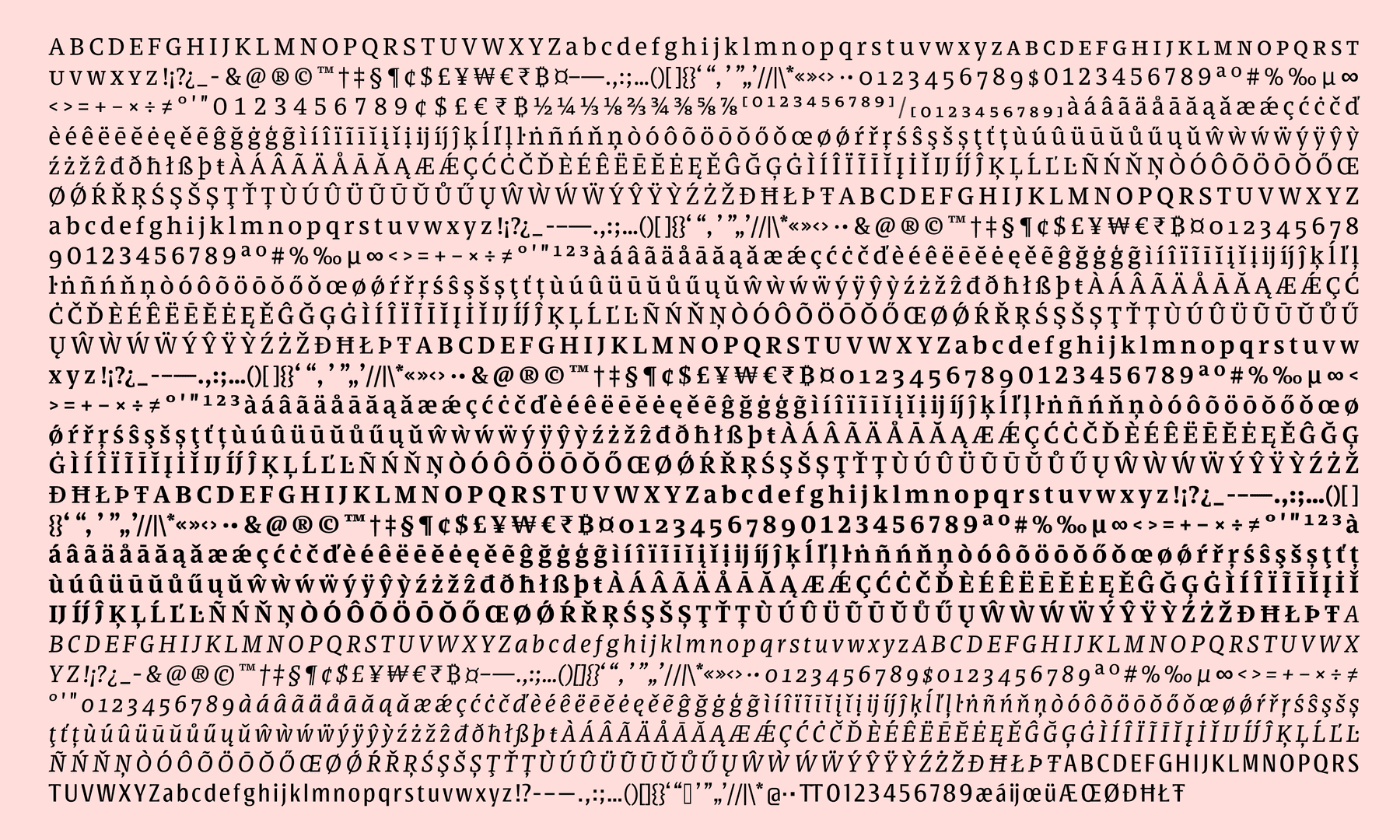 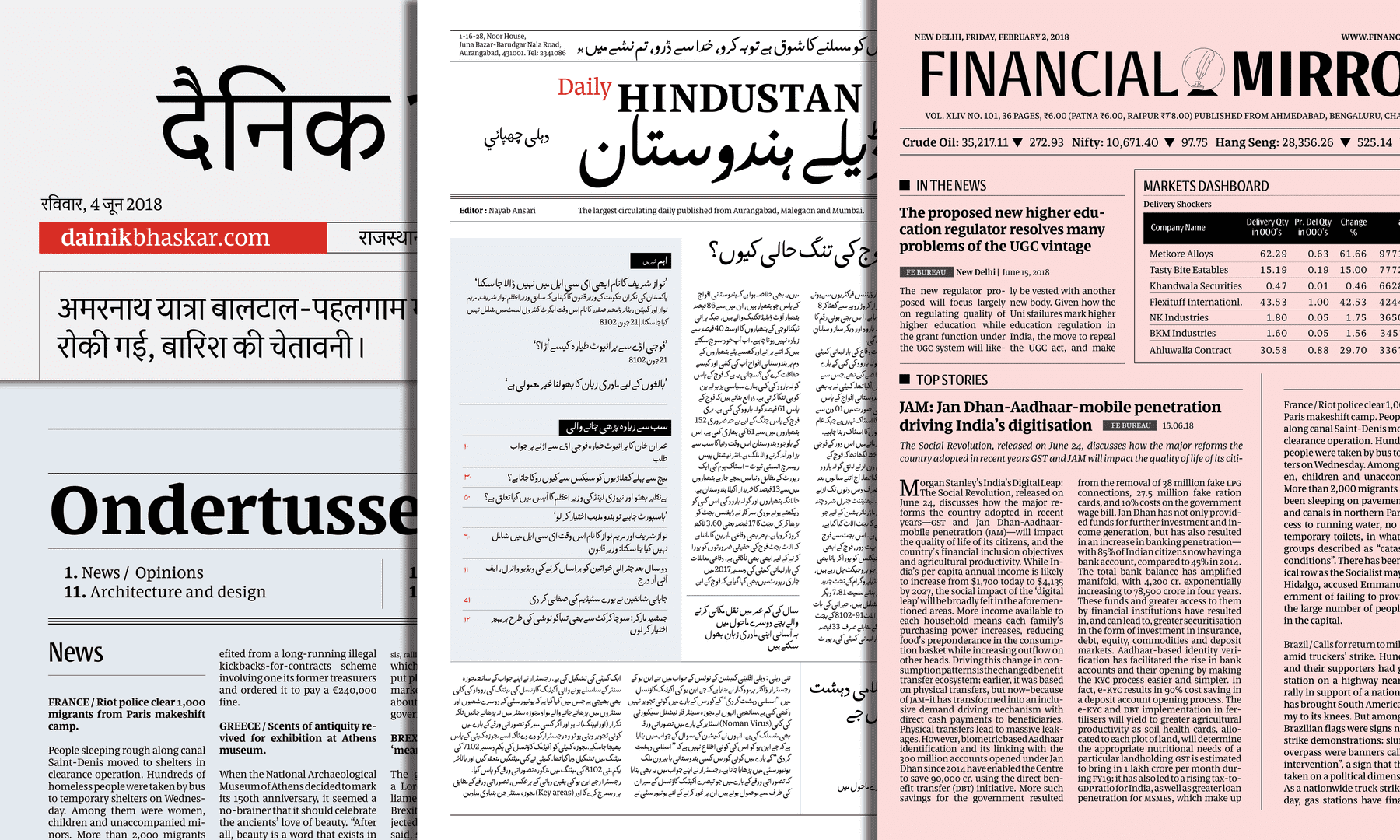 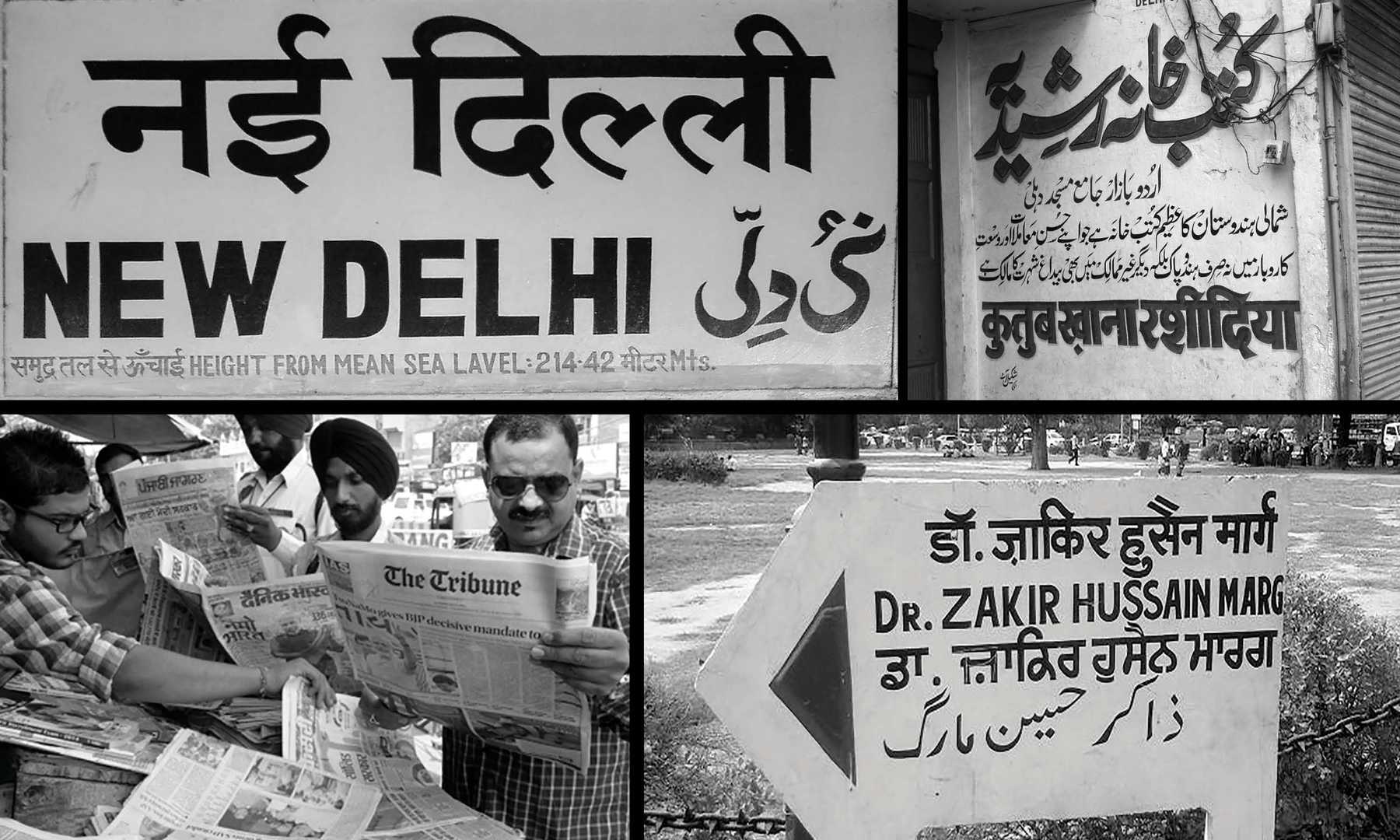 In November 2017, the idea of Qutub first germinated. It started with the goal of making a typeface for New Delhi, to represent the city. Though soon due to certain factors, and being unable to create concrete rules as a brief, making a newsface was the best way to do so in my opinion. I made the typeface to illustrate the basic nature of the city as well as achieve what newspaper typefaces must: be highly readable, effective at small sizes, and space efficient to pack words into the available (usually limited) space.

Delhi is one of the most populated cities in the world and there are certain parallels in the nature of a big city that can be drawn with a newspaper– which is populated with diverse subjects and affairs. The two are extremely messy if you get into the details, but at the end bring together alot of people/ words, subjects/ behaviours under one umbrella. 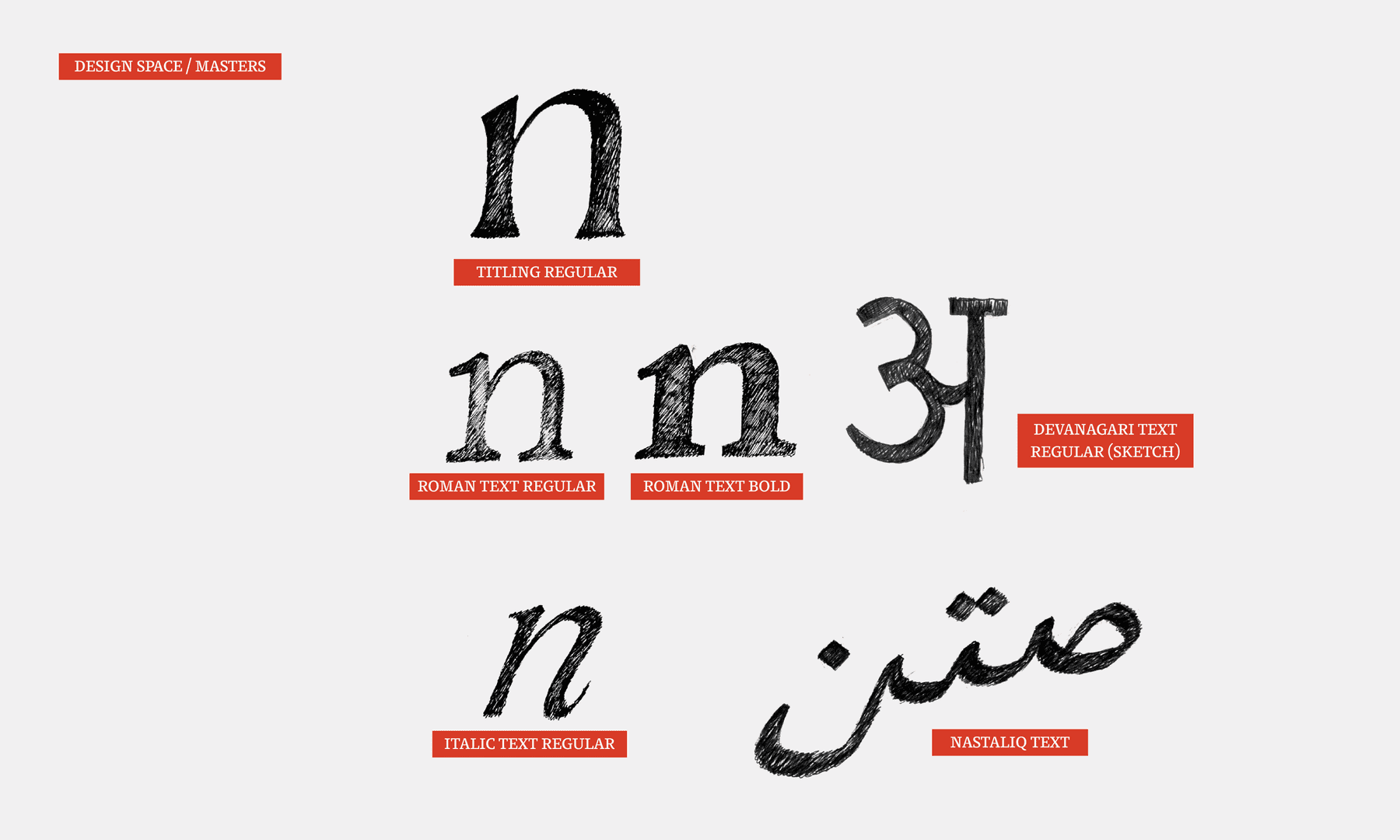 To achieve the cosmopolitan-ness of Delhi in a typeface, it had to be a multiscript project. The three scripts covering most of the population of the city are Latin, Devanagari and Arabic Nastaliq, which is used for Urdu. 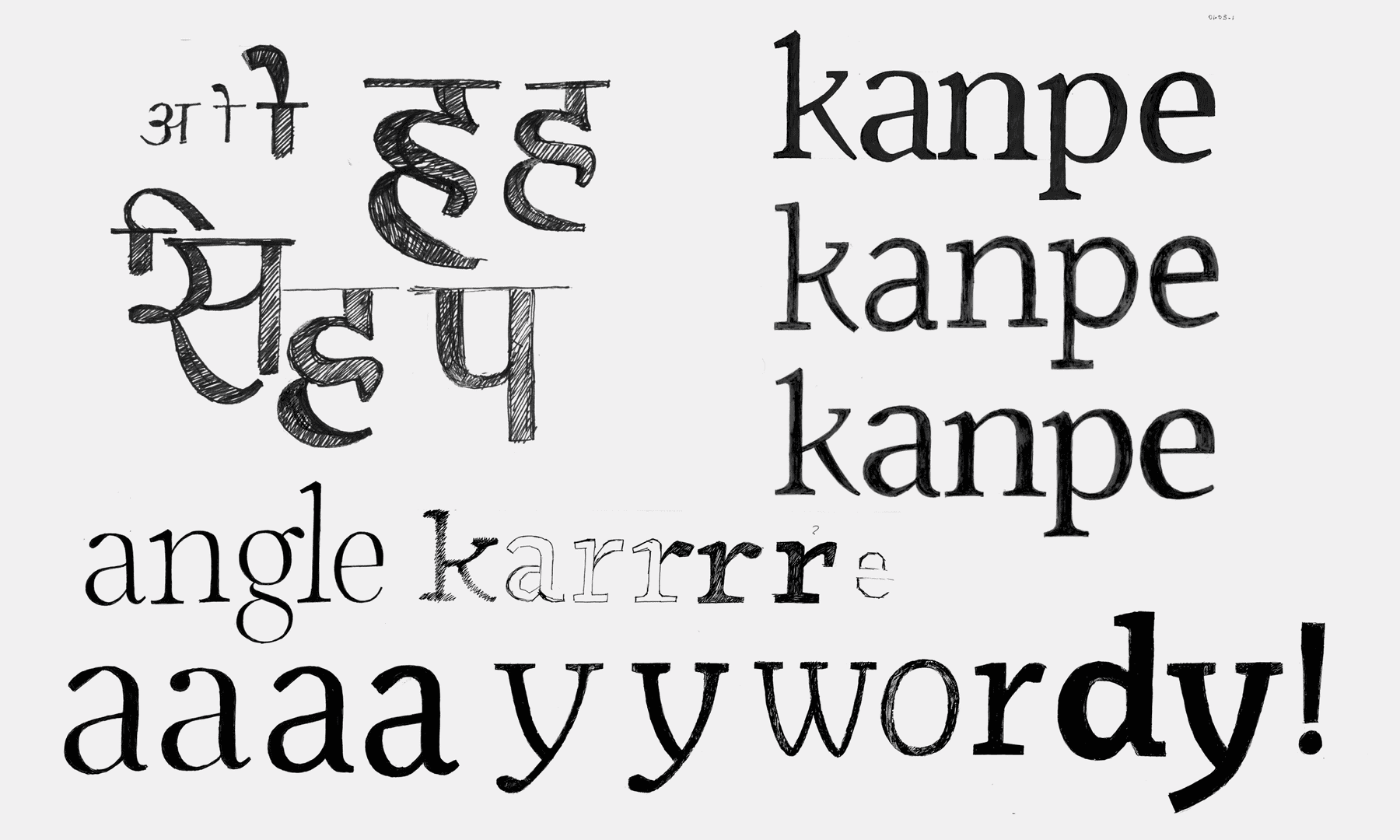 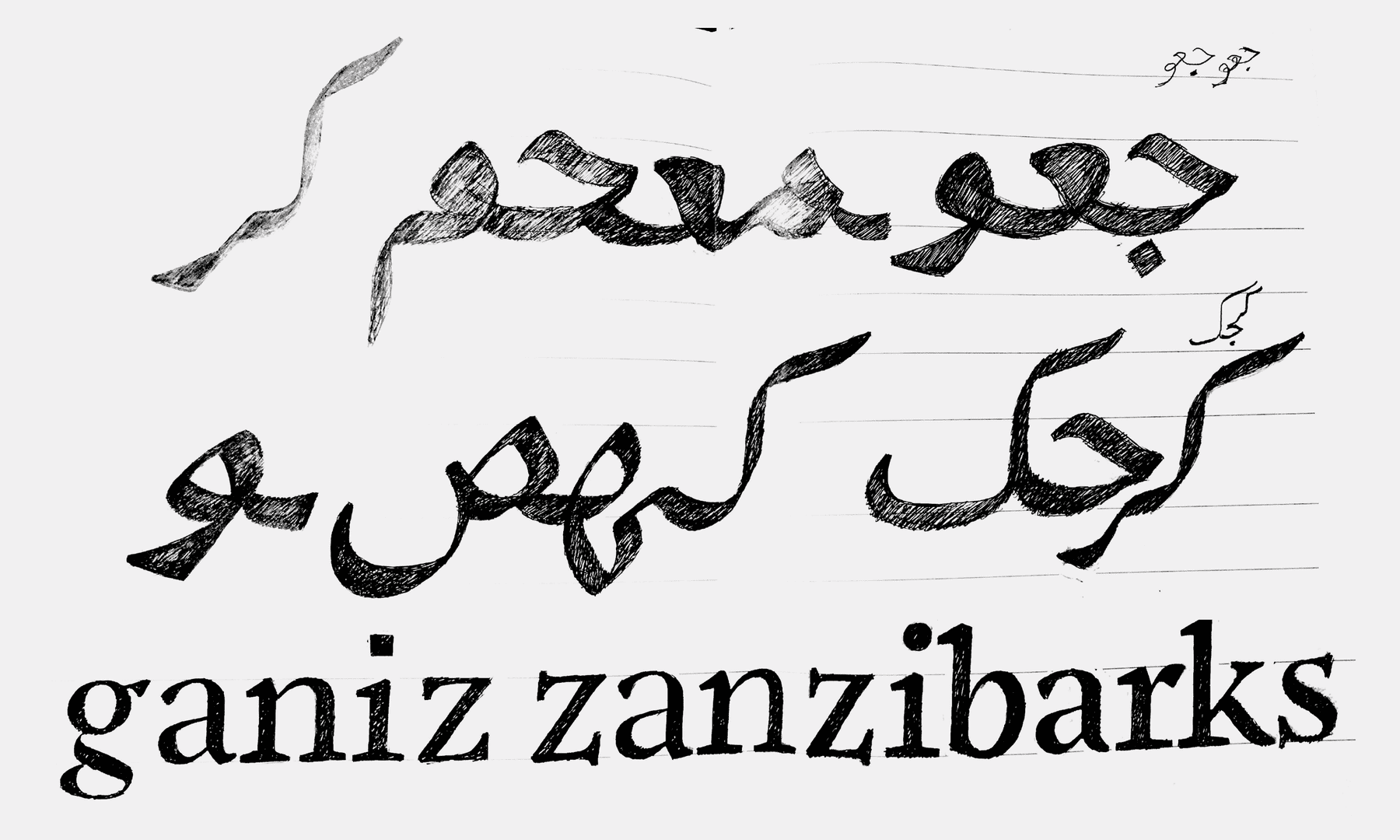 After the first explorations and a quick digital sketch of the initial drawings, it became clearer which details worked best at the intended sizes and which did not matter. For example– shape of the serif was less important than the weight of the serif. This new direction lead to a new set of explorations, which gave a small insight into where it the project was going – but far from what it was eventually going to become by the end of June 2018. 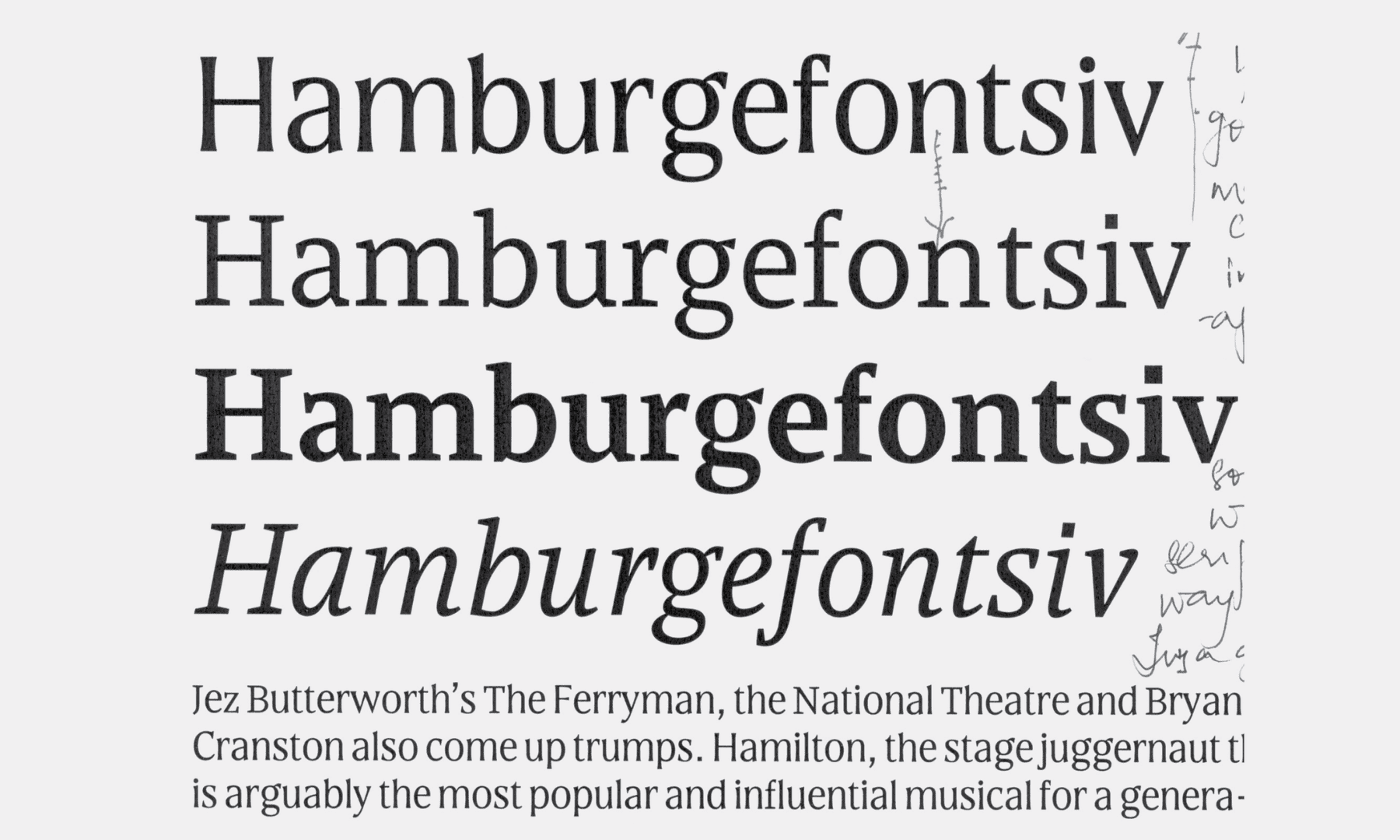 The titling style does the same thing as the text styles, but better. The environment of the ‘titles’ or headings are even more limiting in their vertical space, therefore this style is more compact and condensed.

Chalking out the other scripts, only began after achieving a basic level of clarity on the Latin. Since the work on that was the most extensive in terms of filling out charactersets and proofing, it was important to base the other scripts on a stable foundation of features – provided by the Latin in this case. I tried to bring in the ‘flowy-ness’ of the Nastaliq into the Qutub Arabic – which still sits on a horizontal line. Due to time (and coding capability) constraints, at this point I was unable to develop it in the cascading– Nastaliq fashion, which involves vertical conjuncts and a bit of coding knowledge. I came this far with tremendous patience from Bahman Eslami, who gave me constant feedback and corrections. That being said, I will definitely want to pick this up again in the future, and work along side someone with the available knowledge, and bring this to completion.

It was similar with Devanagari. Although, it was just me– drawing the possibilities and unifying features across these three, very distinct scripts. Qutub Deva is much in it’s infancy and this was a proposal/draft.

Drawing and producing Devanagari with a new software (which I hadn’t used for the purpose of making Devanagari fonts before) was a huge learning experience for me, and I will definitely continue doing the same. 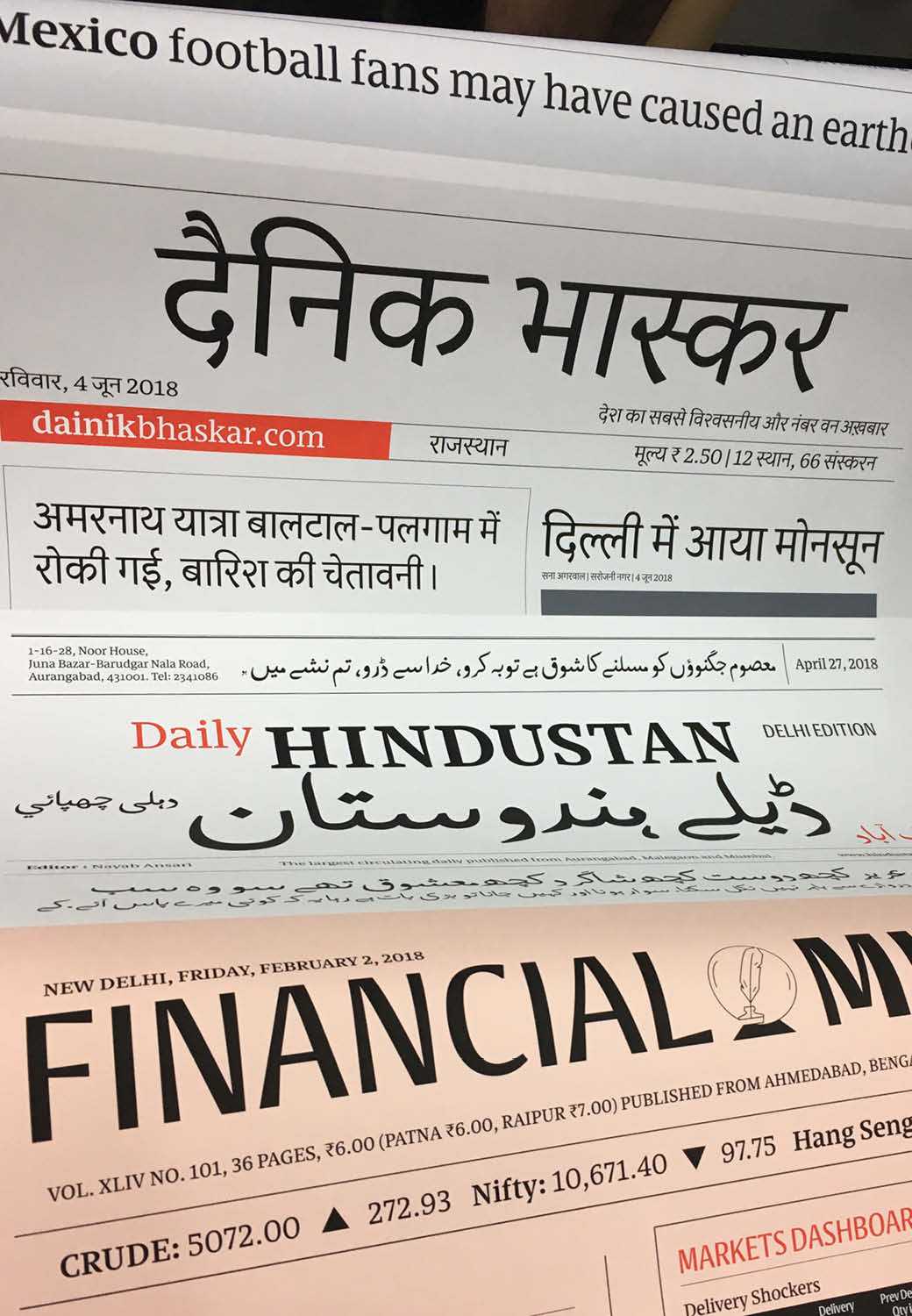 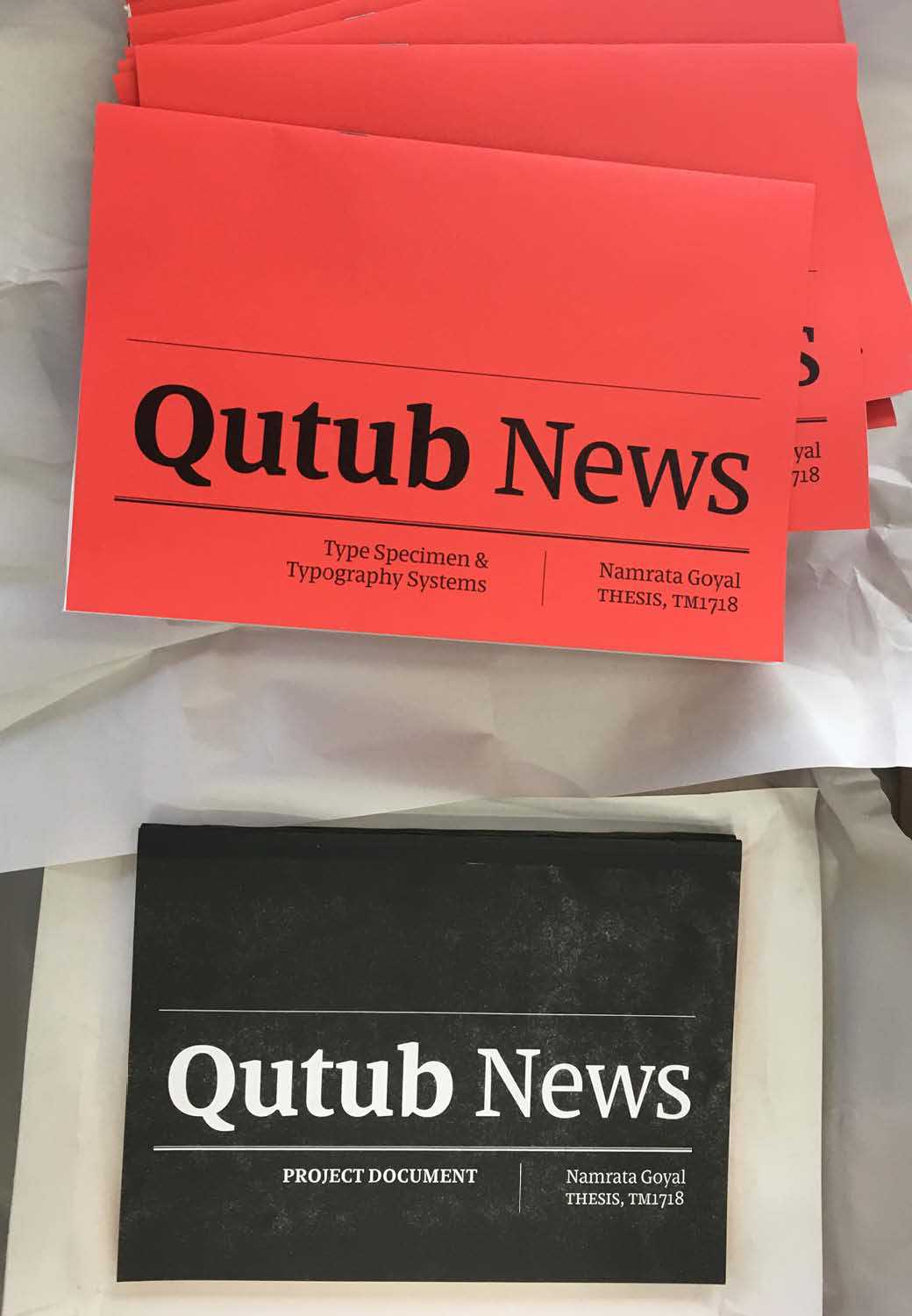 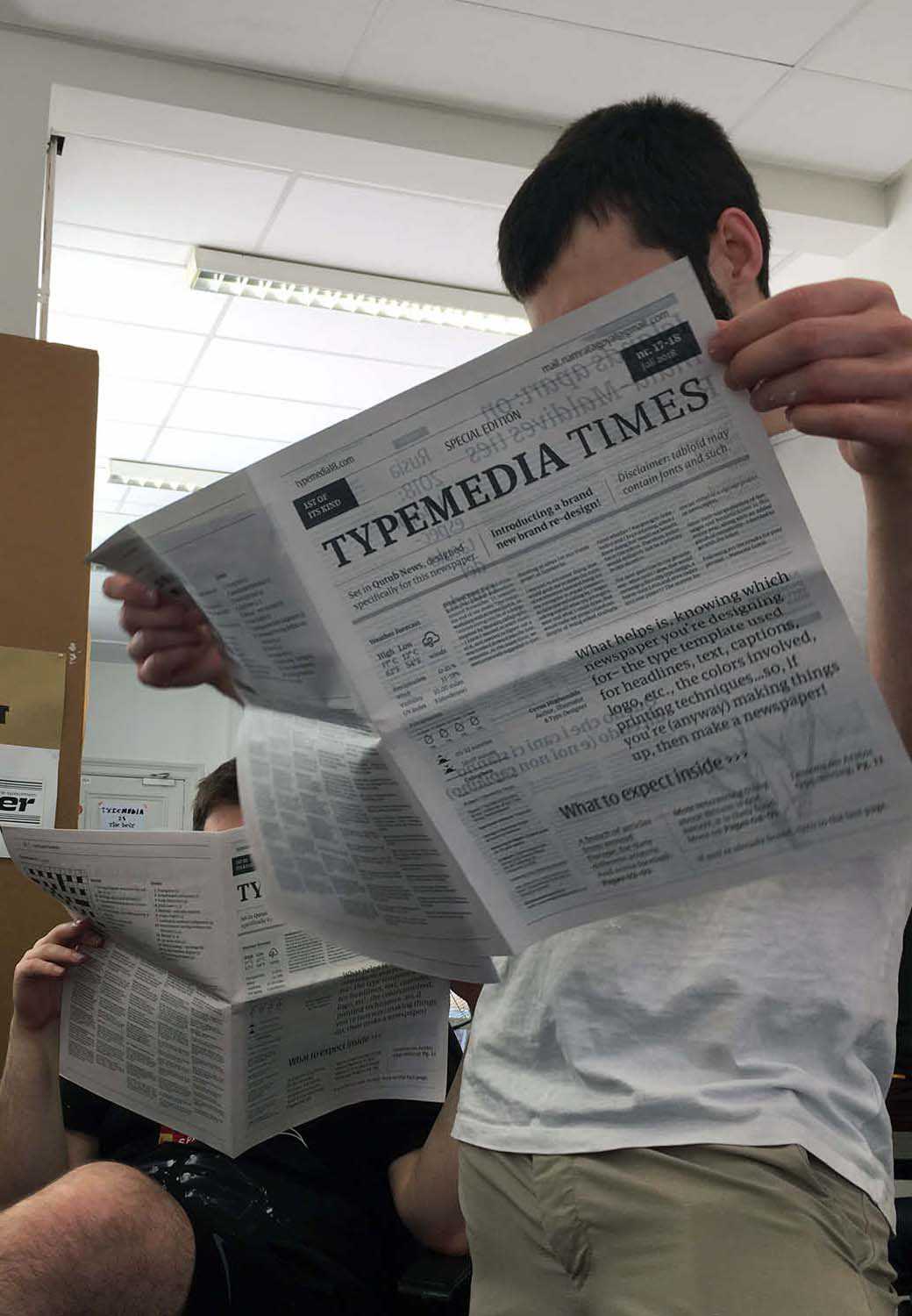 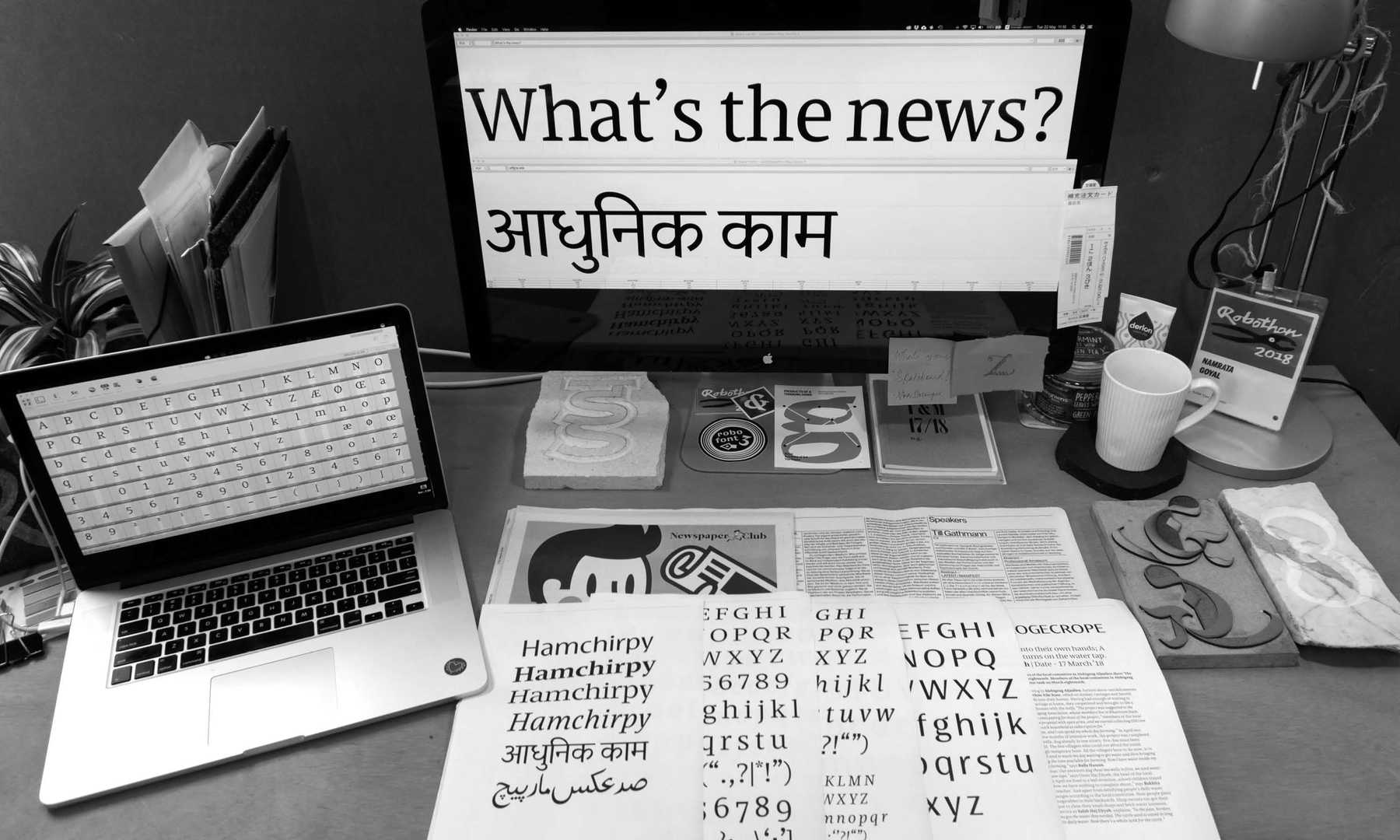 All type designs and images are the exclusive copyright of their creators.